Jürgen Blickle is awarded the freedom of the town of Bruchsal

Jürgen Blickle, CEO of SEW-EURODRIVE, was awarded the freedom of the town of Bruchsal at the beginning of October.

The Mayor of Bruchsal, Cornelia Petzold-Schick, presented the town’s highest honor to Jürgen Blickle in a ceremony at Bruchsal Palace.

In the unique atmosphere of Bruchsal Palace, Jürgen Blickle received the certificate of the freedom of the town before a distinguished audience with many of his close supporters.

The honor is the highest possible award from the town of Bruchsal. The Bruchsal Municipal Council agreed unanimously to honor Mr. Jürgen Blickle with this certificate.

Former Mayor Bernd Doll called Jürgen Blickle one of the city’s outstanding characters thanks to his “exemplary life story and success” and his “extraordinary social commitment to the people of Bruchsal”.

Cornelia Petzold-Schick praised the way that Jürgen Blickle had always remained true to his roots in Bruchsal and helped shape the town through many supportive projects, despite the global orientation and success of SEW-EURODRIVE. For him, the focus is always on people. She continued to say that the Municipal Council was awarding him the freedom of Bruchsal as a sign of its respect “for what you have done – and are still doing – for your home town

With entrepreneurial skills, Jürgen Blickle made the company founded by his father, Ernst Blickle, the world’s leading manufacturer of drive technology and automation. According to Mayor Petzold-Schick, Mr. Blickle made an extremely forward-looking decision in promoting globalization and building a site in China. “The development of SEW to become a global player was down to you.”

In his acceptance speech, the CEO said: “The employees have played a vital part in this success. (…) I never wanted to become the boss. But things turned out differently.” Statements like this confirm once again the words of the former mayor, Bernd Doll: “Despite his extraordinary social skills, Mr. Blickle has remained extremely modest.” 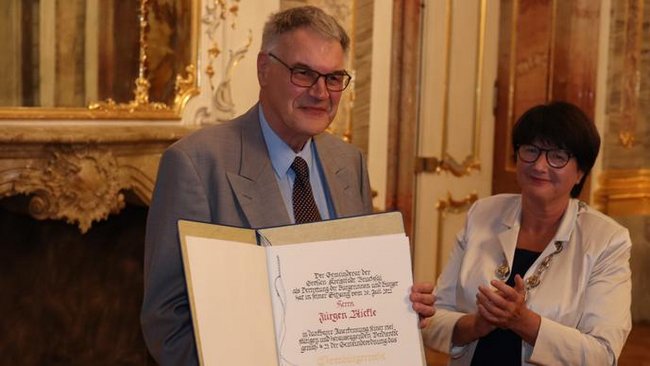